“The dynamics of the narrative, the simplicity of the costumes, the strength, poise and expressive talent of the three dancers, well supported by light and sound, pulsated with an energy emanating from the artistic director and the entire production team at the Akademi and Polka Theatre.” 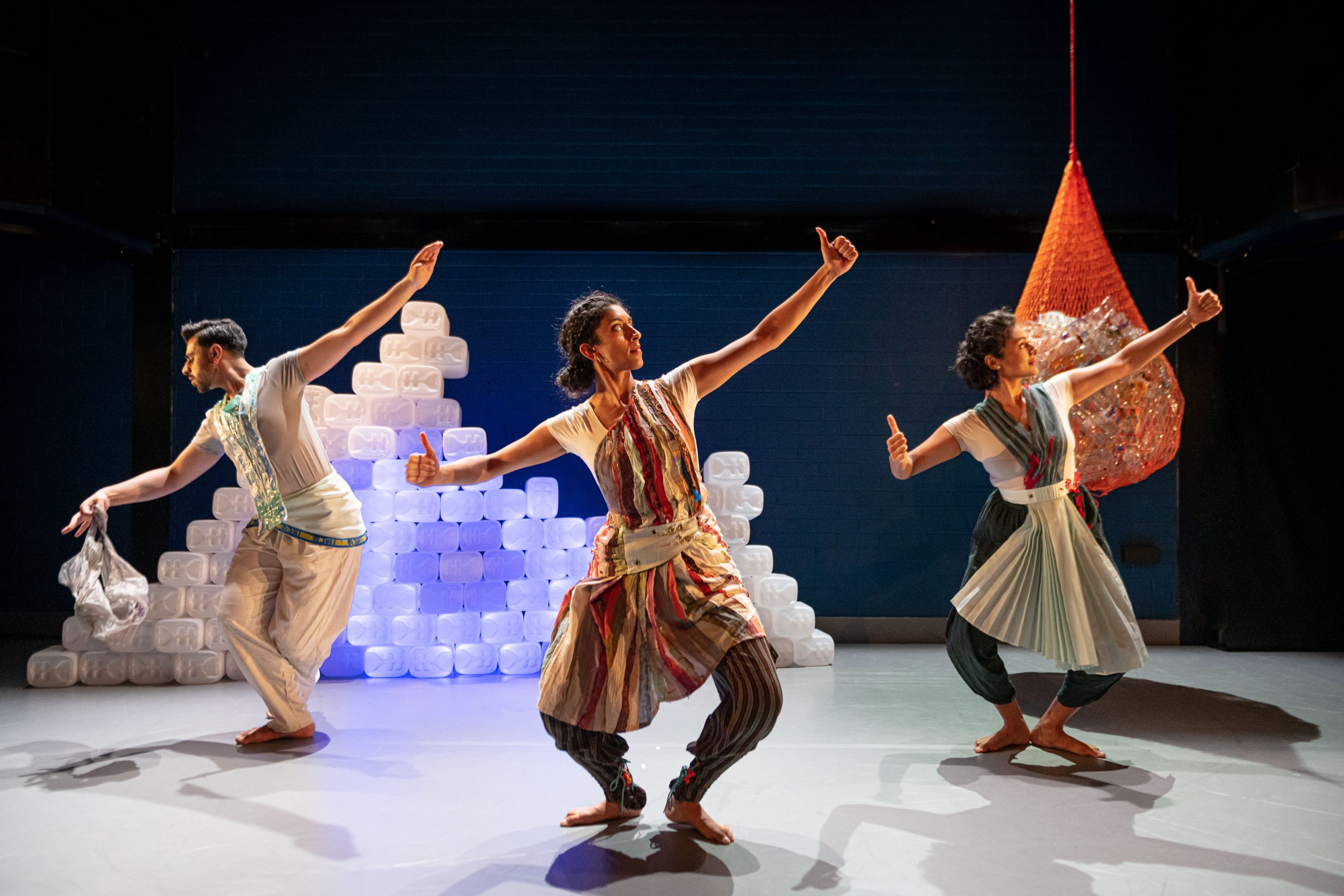 Three years ago Suba Subramaniam, Artistic Director at Akademi, began exploring cultural relationships with plastics. The concept has evolved into a piece that has gained depth and layers of meaning in time and with input from all the members of the creative team.  Plastic Drastic Fantastic, co-produced by Akademi and the Polka Theatre in Wimbledon, has opened to coincide with the Easter holidays.

When entering the family-friendly auditorium in Polka’s Adventure Theatre, children are invited to sit on the carpet close to the action. We sat further back and found small colourful cushions that can be held in our hands to feel the pulsating vibrations responding to the sounds of the music, a clever device that has been tested by deaf children. The set design was particularly impressive, changing as the story unfolded. The show opened with an arresting visual image of a wall of white plastic containers against a black backdrop with a large plastic string bag containing plastic bottles, hanging ominously at a little distance towards the back, signposting the theme of the performance. As the dancers stepped onto the stage a previously inert white plastic sheet covering the front of the stage sprang to life with the music, spilling out from a blue recycling bin.. The wave-like billowing plastic sheet lit with blue LED lights entranced both children and adults. An opening like this not only engages, it sets the bar high for what the audience can expect, and what followed did not disappoint.

The narrative was structured in five parts. The opening dance sequence where sea waves spill onto the stage with the dancers creating some beautiful large waves with the bodies, was followed by the story of plastic in everyday life: from the time we fall asleep, wake up, get ready, take the train or the tube to go to work (the London Underground sign came up in plastic containers with red and blue LED lights) and come home. The dance movement  and the sounds simulated daily life in a way that kept the audience enthralled..

The next scene of plastic-making may have been a bit harder for the younger children to understand; however, the simulation of fire with lights in the plastic containers and the mudras of classical Indian dance where fingers simulate dancing flames provided clues. The excellence  of the three outstanding dancers and the choreographer was especially notable in the liquid movement through this sequence before the plastic containers appeared on the conveyor belt. The tense drama of this scene led to a lighter episode where plastic bottles are reused creatively, from a bottle  becoming a bird feeder, to a planter, to a ball game.

The performance reaches a dramatic crescendo when a dancer weighed down by the plastic string bag she picks up, symbolic of the planet carrying this burden, lets the bag fall from her back with the contents crashing and spreading across the stage. The soundtrack changes to the sound of waves and seagulls. The dancers are fishes and turtles choking on the plastic and dying. When I asked my granddaughter if she could hear the sea and see what was happening to the plastic bottles, she said: ‘I want the other sea to come back.. She was clearly impressed not just by the set but by the expertise of the accomplished dancers. She scored the show 10 out of 10. When I asked her what she thought of the dancing she  commented ‘I didn’t know that you could even learn to dance like that.’

The dynamics of the narrative, the simplicity of the costumes, the strength, poise and expressive talent of the three dancers, well supported by light and sound, pulsated with an energy emanating from the artistic director and the entire production team at the Akademi and Polka Theatre. I strongly recommend that parents and children catch this wonderful show.

Reviewed by Anita Chanda for Pulse.