The Troth | Arrival in India 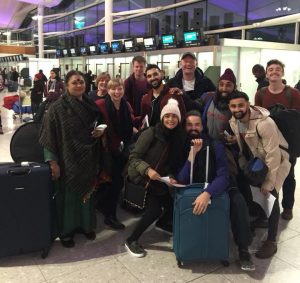 The Troth cast and crew embarking at London Heathrow airport

Akademi’s new production The Troth has arrived in India at the start of a four-week tour. The show, directed and choreographed by Gary Clarke, is a re-telling of Chandradhar Sharma Guleri’s classic Hindi short story Usne Kaha Tha.

The highly-anticipated contemporary dance adaptation will receive its world premiere at Jaipur’s Hawa Mahal palace on 26 January as part of the Jaipur Literature Festival, followed by dates in Delhi, Bhopal, Jabalpur and Kurukshetra.

The tour of India has been supported by Arts Council England and the British Council through Reimagine India (as part of the UK-India Year of Culture), the Indian Council for Cultural Relations and Air India.

UK audiences will have the opportunity to see The Troth during February and March, when the show opens at Curve Leicester, followed by a short tour.